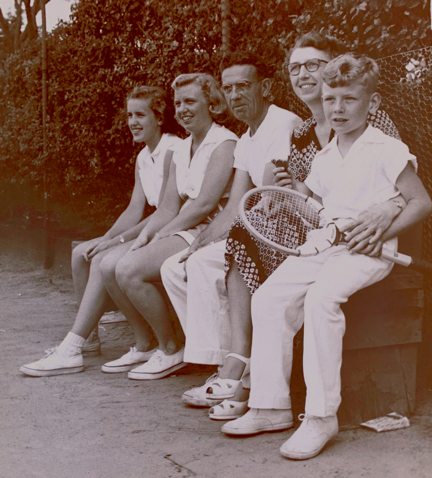 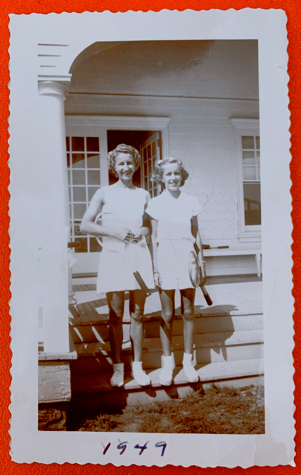 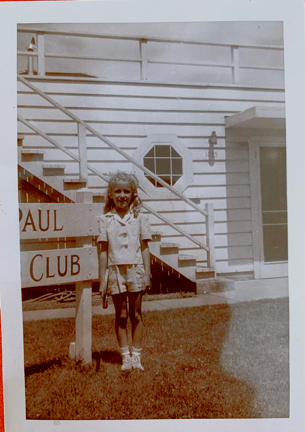 Jeanne Arth Reflects on Tennis, Family and Gratitude for Community

In August 1940, Leonard and Violet Arth and daughters Shirley (7) and Jeanne (5) bought their first home at 1083 Osceola Ave., a few doors west of the club. Their son, Tom, was born in 1944. The home was close to St. Clair and Grand Avenues, Linwood School, St. Luke’s Church and Central High School. Leonard was employed as a draftsman at the Minnesota Highway Department on University Avenue. Being a middle-class family, membership at the club would never be a possibility, so tennis was never a consideration.

When Louis “Louie” Soukup (caretaker/instructor) saw the Arth sisters walk by with their dimestore rackets, he invited them to use the practice court and main courts before the Crocus Hill ladies arrived at 9 a.m. for their social tennis. By the ages of 8 or 9, the girls had been invited by the ladies to play as a team and join their group. This allowed the girls to develop their doubles skills, serve, volley, etc., and become a strong team. Later in the afternoon, men would arrive ahead of their court times and invite Jeanne to hit balls with them. Soon she became a sub and later one of their tennis foursome. Leonard also played with club members and became a regular among them. Whenever he had time, Louie also instructed Shirley and Jeanne.

In the early 1940s, the club became the Olympic Skating Ring in winter. After work, Len Arth would flood the rink at 5:30 p.m. and return at 7 p.m. to work behind the counter and keep order on the rink until 10 p.m. Shirley and Jeanne enjoyed skating, too.

As early as 1946, the girls began to play in NTA tournaments: girls 15, junior girls, women. They dominated in all age categories, in singles and doubles. After the age of 14, Jeanne never lost a match in the NTA. When she wasn’t available to play, Shirley won the titles. Their NTA rankings were No. 1 in singles and doubles, in all age categories, from 1947 to the 1960s.In 1948, Shirley (15) and Jeanne (13) represented the NTA at the U.S. Girls 18 Championships at the Philadelphia Cricket Club, played on grass courts. From 1949 to 1950 they were club quarter-finalists. In 1950, they were finalists, losing to the legendary Maureen Connolly and her partner. Their U.S. doubles rankings were No. 3 and No. 4. Their U.S. singles rankings were Shirley No. 8 and Jeanne No. 5.

Both girls graduated from the College of St. Catherine. Shirley earned a bachelor of arts degree in elementary education in 1954. She married in 1961 and raised six children. She was inducted into the Minnesota Tennis Hall of Fame. Jeanne graduated from St. Kate’s in 1956, with a bachelor of science degree in physical education. She also earned a master’s in psychology and counseling in 1971 from the University of St. Thomas. She taught for 37 years: physical education for 20 years; and counseling for 17 years. She retired in 1993.

In 1954-1956, Jeanne played in the first National College Girls Championships at Washington University in St. Louis, Mo. She was a singles finalist for three years and a doubles winner for three years, with different partners.

In the summer of 1957, the NTA encouraged Jeanne to play the major women’s tournaments on clay and on grass. She had excellent singles and doubles results. Her U.S. women’s singles ranking was No. 7, and with her doubles partner, Pat Naud of California, Jeanne was ranked No. 3 in the United States.

Jeanne considered 1958 as her most memorable tennis year. The U.S. Women’s Doubles Championships was held at the Longwood Cricket Club in Chestnut Hill, Mass. She and Darlene Hard of California were both without doubles partners and decided to team up. They advanced to the finals and defeated the No. 1 Althea Gibson and No. 2 Maria Bueno, the reigning Wimbledon Ladies Champions, in three sets. Jeanne remembers hitting the winning volley.

A week later, at the U.S. Women’s Singles Championships at Forest Hills, N.Y., Jeanne advanced to the semi-finals, defeating the No. 2 and No. 5 players. Her 1958 U.S. women’s singles ranking was No. 6, and No. 1 in the doubles rankings.

In 1959, Jeanne’s entry to play Wimbledon at the All-England Tennis Club became a reality. She was able to leave her teaching job in early May to play in a few preliminary tournaments. Her preparation was extremely limited due to no indoor tennis facilities in the Twin Cities. She reached the third in singles. In mixed doubled with Bob Mark of Australia, she reached the semi-finals. Jeanne and Darlene Hard won the Ladies Doubles Championship. The Duchess of Kent presented them with the Duchess of Kent Challenge Cup on Centre Court before the Royal Box. Playing six or seven matches on Centre Court and leaving as a Wimbledon champion seemed like the impossible dream.

Arriving home in early July, she took a few months off. She was named to the U.S. Wightman Cup team and played doubles with Darlene. The United States upset England 4-to-3. Jeanne and Darlene defeated the No. 1 English team.

Jeanne and Darlene won their second U.S. Women’s Doubles Championship and earned the No. 1 U.S. women’s doubles ranking. Playing at Forest Hills, Jeanne lost to Maria Bueno, the No. 1 player, in three sets. She was the only player to win a set from Maria, the singles champion.

Returning home in fall 1959, Jeanne decided to end her competition on the women’s tennis circuit. In 1989—30 years later—she visited Wimbledon for the first and last time. It was a special moment of thankfulness and achievement to see her name written in gold letters on the emerald wall of the All-England Tennis Club: 1959 J Arth-D Hard, alongside all past Wimbledon champions.